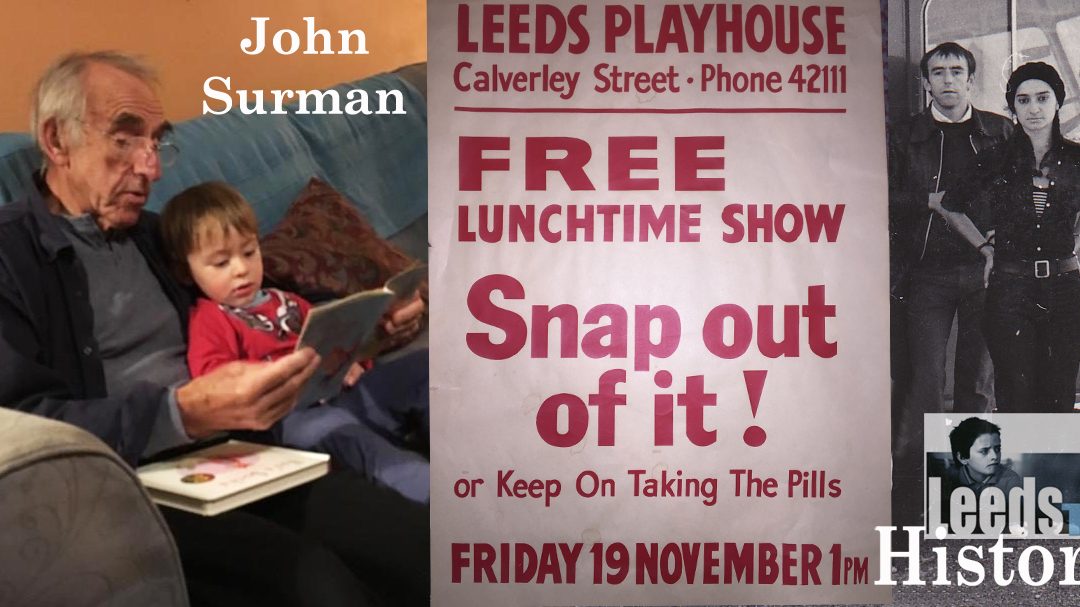 Annalyn got in touch with with another founder member of the company, John Surman, who went on to replace Roger Chapman as company director. When Annalyn asked John for his memories this is what he sent.

“‘Oh that I had the wisdom then that I have now.’

I do have very warm memories of those first few years, and looking back it does seem to be the golden summers of childhood; an amazing time for me of naivety and innocence and fun. We were a good team . . . at least we seem to have been a good creative team and the work was well received and appreciated, with enthusiastic responses from teachers, who were always grateful for follow-up suggestions at our workshops. I am not sure what my contribution was at that level, I loved being on the floor acting and reacting, it felt good and I was happy to let observers analyse and theorise and compartmentalise.

That is enough of me.

The ‘early days’ founding team: Jim (I’m still in touch with him – only occasionally now), Libby, You, Paul (sounds like you had a good evening with him, I haven’t seen him for years, how are his knees?) and myself. Roger kept nipping in and out every now and then telling us about schemes he was setting up and then disappearing . . . and of course, there were always a few snags. Left to our own devices we just got on with it.

A suspicious stranger lurking around.

Finding clues and puzzles to solve.

Piecing together the evidence to follow a trail to an open space, where an intriguing, mysterious looking contraption . . . Looking like a Bomb!…was about to be detonated by that dodgy looking stranger we have been trailing.

With the timer in his hand and only 10 seconds to avert disaster, we have to stop it.

I have no idea . . . I can’t remember . . . But we took it to Berlin, four of us in a van – you, Libby, Paul and me, during a cold, snowy month of February, and it was long before the wall came down. Late in the night we had a rigorous examination of our luggage and the contents of the van at an East German border checkpoint, then an hour, and only an hour, to travel ‘the corridor’. It was dark and thrilling – I don’t even remember seeing another vehicle on the road.

I wouldn’t have missed that whole East German experience: the tube ride into East Berlin: Arturo Ui at the Berliner ensemble: staying and working at the Akademie der Kuntze in West Berlin – I wouldn’t have missed it for the world. Dark and grey, it was like being in a Len Deighton spy story . . .

And then we took that show, with other stuff, to South East Asia.

This is turning out to be a walk down memory lane; as so often is the case, what I did not want to do I end up doing. I think what I am trying to do, and have been doing, is sorting through memories that are of value, focusing on what those early years with you and other founder members – Jim, Libby, Paul – gave me. I don’t think the value of the work was ever in question, not for me or the rest of us, or the teachers or the participants, but it was and still is a necessary and valuable question to be asked for the work to keep its integrity. So . . . It’s sorting out what I got from those early years and what I may still have.

I’m sending this for now as it is over a week since enquiring if I’m still around. This was just going to be a ‘got the enquiry, contact made, all well, will write shortly’. I’m in the middle of a big paint job, that I want to get finished – so I’m a bit knackered – and at the end of the day I find it difficult to locate all of those interesting things I thought of during the day while working, that might be of interest to write down and send. Hey ho!